Goddess Luna and her pee fetish

Goddess Luna wanted some information from this loser but he did not give it to her. She tried to ask nicely and was met with silence. She got fed up of asking and she forced him to give her the information by pissing on him. She pissed into his mouth using a funnel and the humiliated him badly. The guy tried to beg for mercy but it was too late. 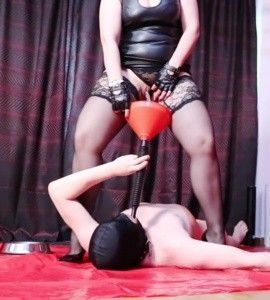