This mistress had to make sure that her boyfriend was not going to do what he had been doing. He had ignored her advice and it was now time for her to take his punishment a notch hire. That is why today she introduced pee to the equation and she made him drink her pee. She also warned him that if he did not change, she would shit on him.

This mistress knew that she did not study much as she spent a lot of her time partying. But she had to graduate with a good grade otherwise she knew she was fucked. That is what prompted her to look out for her professor and force him to give her a good grade. She had to make sure she got it so she peed on him and turned him into a pee slave until he agreed to do it.

Angry lady Mary pees on boyfriend outside the house

Lady Mary was angry at her boyfriend for what he had done and since she had warned him not to do it but he had ignored her, she had no choice but to show him what the consequences of his actions were. So she dragged his ass outside the house after she had stripped him naked and she peed on his face and directed most of it into his mouth.

Mistress Samantha felt like peeing and she remembered that she had never tried pee domination. And since here slave was around, she summoned him and when he got there, she turned him into a human toilet. He was forced to lie down and she used a funnel to pee into his mouth. He drank her pee with a lot of difficulty but he knew it was not optional for him. 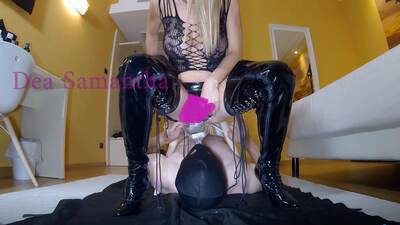 Mistress Sarah and mistress Nikki laughed and played along when this guy told them he wanted to fuck them both. They played him and when the right time came, the mistresses, who were naked, peed on him instead of riding him like they had told him they would. He had to drink both their urine as well as smell their farts. He was so near yet so far from fucking them.

Mistress BlackDiamoond found out that she was being lied to by her slave and that was a behavior she did not want to encourage in her slave. So she chose to dominate him and she did it by torturing him using her pee. She turned him into her human toilet and she made him drink her urine. He tried to negotiate his way out of trouble but it did not work.

Mistress Hanaka pees on herself

Mistress Hanaka was pressed and she knew from the way she was pressed, she could not get to the toilet in time. So she pissed on the table. She did not care what happened later on. She called her slave and she asked him to lick her pee and to smear it on his face after dabbing her hands in it. The poor slave did what she asked him to do.

Mistress punishes classmate for failing to submit her papers

This student had given her friend a paper to submit for her but he had not done that. She was in trouble with her professor and when she had dealt with the problem, she went to him and she punished him. She waited till other students had left the class then she facesat on him. She farted on his face and nearly choked him before she made him drink her pee.

Mistress Isabella and her urine fetish

Mistress Isabella knows how to get what she wants. She wanted this guy to loan her money but he refused and said she was risky. She pretended to be upset and she humiliated the guy and even pissed on him. She tied him up and did crazy things to him and made sure he was humiliated like never before. She then forced him to lend her money and went away.